WOULD SOMEONE PLEASE STUFF A SOCK IN KARL LAGERFELD'S PIE HOLE? 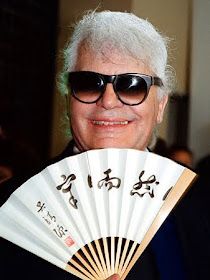 Karl Lagerfield continued to spew more vitriol today on the call for a ban on "size zero" models...

"No one wants to see curvy women. You've got fat mothers with their bags of chips sitting in front of the television and saying thin models are ugly. Fashion is about dreams and illusions." 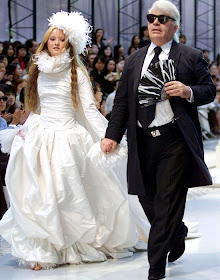 How bizarre, especially coming from a man who has forgotten he was once morbidly obese. These days, he looks like he just crawled out of a crypt... 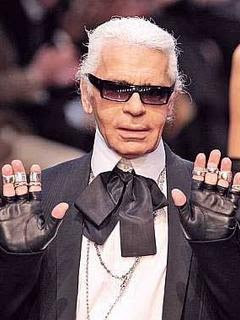 Lagerfeld's remarks today were in response to the German magazine, Brigitte, reporting last week that it would no longer feature professional models...that "it would only publish photographs of 'real women' after readers complained they could not identify with the models depicted."

And here are a few more of Lagerfeld's bons mots from January, 2009: 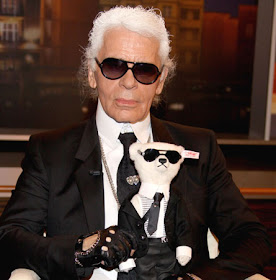 "Hunters in the north "make a living having learnt nothing else than hunting", he said, "killing those beasts who would kill us if they could."

Animals should be killed "nicely" if at all possible, said Lagerfeld, who admitted to being queasy about eating meat.

"I can hardly eat meat because it has to look like something what it was not when it was alive," he said.

Lagerfeld went on to roll his eyes at concerns over eating disorders in the fashion industry.

"In France there are, I think, less than one per cent of people who are too skinny.

"There are nearly 30 per cent of young people who are too fat. So let's take care of the zillions of the too fat before we talk about the percentage that's left."

Two words for you, Karl...ball gag.