JESSICA'S STORY: "I HAVE SUFFERED FROM A PHYSICAL DISABILITY...ALL MY LIFE I DEALT WITH BULLYING. FROM A YOUNG AGE I KNEW I WAS WORTHLESS..." 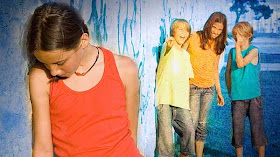 “Hey Medusa
I understand you probably get thousands of emails with people’s stories in them, and that the vast majority of them will be worse and more moving than mine, but I guess the reason I’m sending this is because I need to get it all out. I’ve told a few people before but always stopped short of spilling all my guts because I was so afraid of losing people.
My name is Jessica, and ever since I was born (12 weeks premature) I have suffered from a physical disability called Cerebral Palsy Spastic Diplegia. My condition is mild and, though my gait is distorted, I am still able to walk. All my life I dealt with bullying, starting in kindergarten I was beaten up, harassed and taunted by my peers. I felt so ashamed I couldn’t tell anyone. In my mind it was my fault I was being bullied, and I was just too weak to figure out a way to stop it. From a young age I knew I was worthless, and I hated myself.
It wasn’t just the actual bullying that got to me. It was the fact people judged me as soon as they looked at me. So at age 8 I thought I needed to take attention away from the fact that I was ugly, that I couldn’t take 5 steps without losing my balance. There was an inner urge, something pushing me. I just –had- to find a way. So I slowly cut down what I ate, I would leave bowls around the house and set them up so it looked like I had eaten. My mother would be proud of me, I thought, I’m making myself beautiful. I’ve never really felt loved by my mother and I've always strived to impress her, I always tried to be more like my brother, who in my eyes, and seemingly hers too, was perfect. I knew my sacrifice and hunger would be worth it one day.
It was around 10 years old I started cutting, I was dangerously underweight at the time, with my hips and ribs jutting out, and I –loved- it, but I was still unhappy. I realise now looking back that I was a very sick little girl. I’d heard somewhere that when your body is cut it releases endorphins, the same thing that chocolate does. And I knew that these “endorphins” as they were called, made you happy. And I was very unhappy, I was still being bullied, I still wasn’t smart or thin enough. I still was a failure. So I tried it and I loved the rush. It was almost as good as the hunger. Long story short my legs were the biggest victim of my rage with myself, as they were the cause of all my problems.
This was also around the time my mother began to notice, I’m abridging things here but I was taken to a doctor and then a psychologist and then a doctor again, who combined, diagnosed me with EDNOS with restricting tendencies.
I didn’t want to get better. I loved the fact that everyone now said “oh, that poor girl, she’s so thin” now instead of covertly whispering to their companions “what’s wrong with that girl?” I could now attribute their staring to something other than the fact I was defective.
Recovery is shit. That’s all I can say, but what did it was my parents threatening to pull me out of school and put me into hospital. I hated hospitals and I loved school, because no matter how much I was bullied outside of class; knowledge was a power to me that no one could take away...
I’m apparently now recovered although I think I may be relapsing. I’m restricting and feeling guilty again. Food is my enemy again. I’m trying to fight it because I want to become a successful doctor, and treat those in third world countries. I want my life to matter but there is always that little voice in the back of my head that says I will never be able to get that score on my final exams and my life will never matter so I might as well give in to what I want; to be thin and pretty. Even though I know eating disorders aren’t pretty and I don’t know how to explain it. I still look in the mirror and see rolls of fat. I still hear a voice in my head that tells me I’m worthless and a failure....I just don’t know what to do.
I have a beautiful best friend who always understands, I don’t know what I would do without her. Who knows? I may have already spiralled downwards in myself destructive habits but I know I have to be strong and stay “recovered” for her and for the people I will be able to help in the future by defying my disability and all the naysayers, by fighting the voice in my head that is my eating disorder and by helping those who need it.
Now, at 15 I still cry myself to sleep at night because I don’t know what I’m doing, and I don’t know if I can make it. I just hope that I can....for me, for my best friend, and it may be egotistical to say this, but for the people I may help in the future if I do manage to succeed.
Thanks for reading Medusa...I do hope you post this. Maybe there is someone like me out there....I’ve always been looking for someone who knows how I feel."